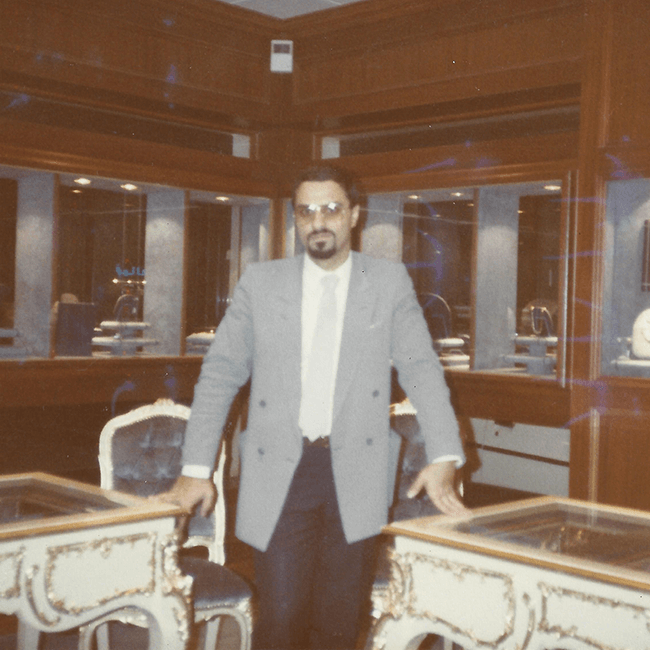 The origin of Michel’s career commences with the introduction of five jewellery stores for Al-Rajhi, owner of the largest Bank in Saudi Arabia. 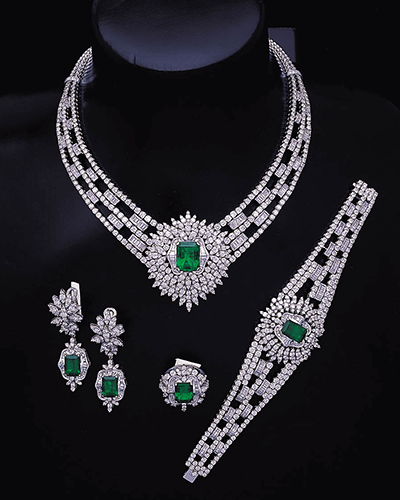 Michel is appointed to create exquisite jewellery sets for members of the Saudi royal family. 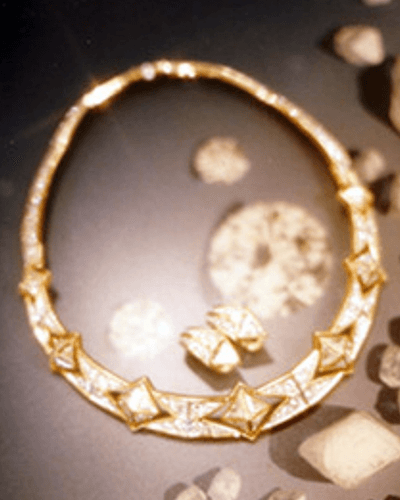 This elegant diamond necklace was commissioned for Queen Noor of Jordan 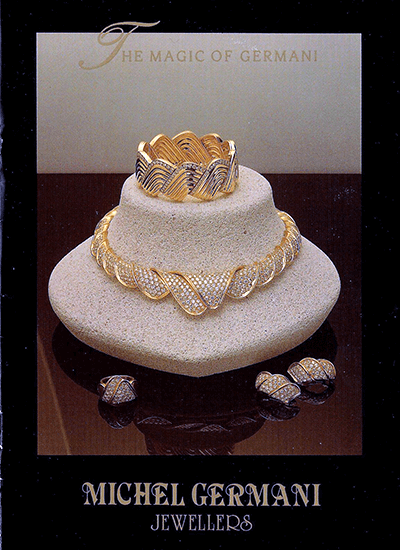 With an abundance of experience, Michel relocated to Australia and established his first shop at Centre point Sydney. 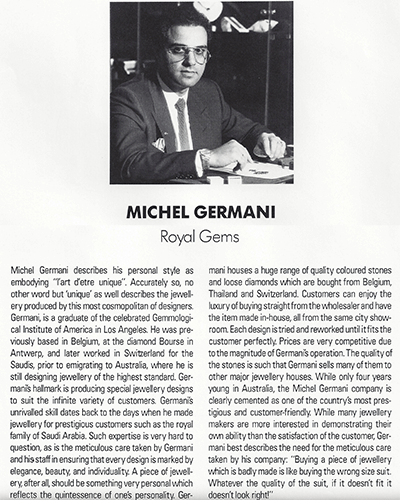 Michel was featured in ‘Royal Gems’ for Australia 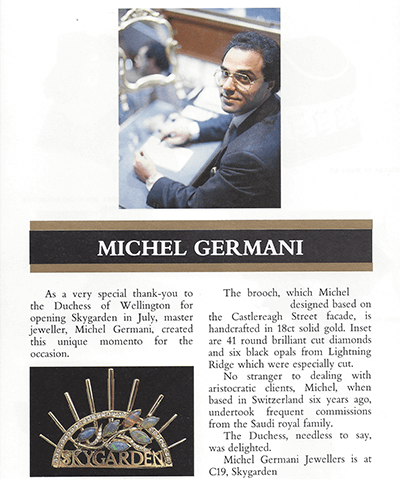 The introduction of the Germani store in Skygarden. A broach is designed and crafted for the Duke and Duchess of Wellington for the grand opening of Skygarden in July 1987. This unique vestige is handcrafted in 18ct solid gold, embellished with 41 round cut brilliant diamonds and lined with six black opals from lightning ridge whilst drawing from the Castlereagh street façade for inspiration. The Duchess, needless to say, was delighted. 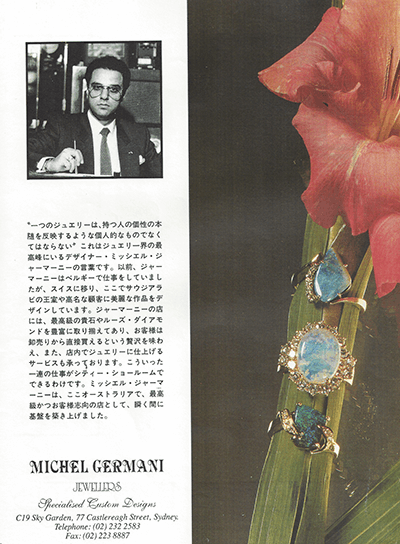 With the participation of multiple global trade fairs including, Vicenza, Basel and Tokyo Makuhari Messe; Michel was the foremost in his domain to enter the wholesale jewellery market in Italy and Europe. 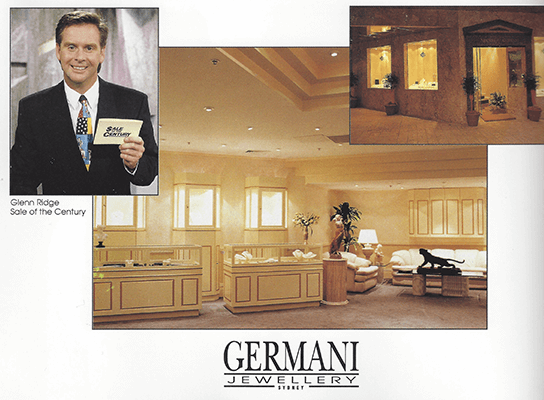 Germani became synonymous with Fine jewellery due to the exclusive sponsorship of a national TV show ‘Sale of the century’ which broadcasted for thirteen years from 1988 to 2001 and thus was established as a household name.

Sale of the Century GERMANI has been established as an Italian Brand in Australia since 1985; GERMANI became a house hold name for Fine Jewellery since the exclusive sponsorship of a national TV show Sale of the Century for 13years from 1988 to 2001. 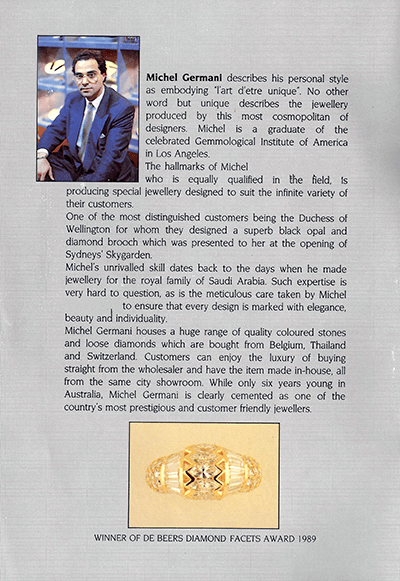 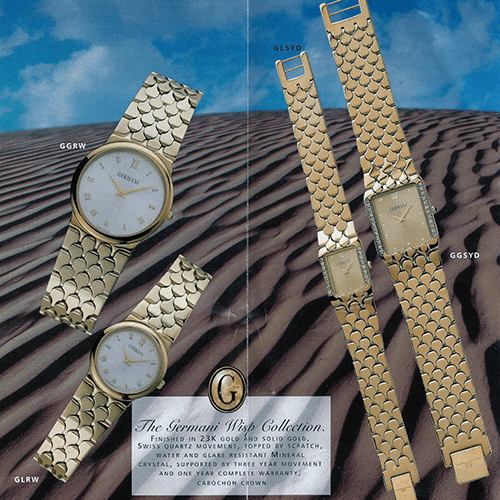 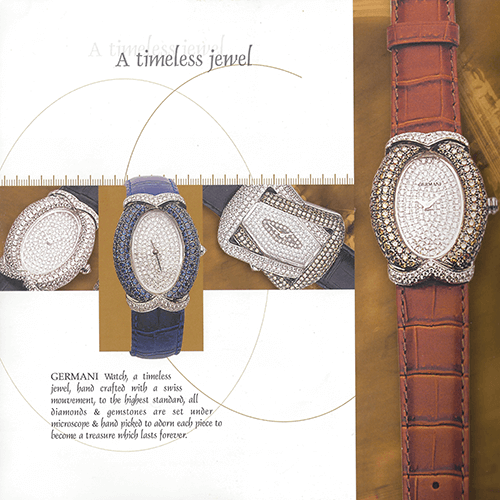 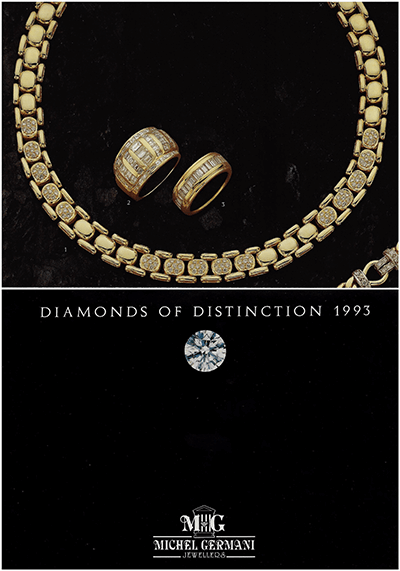 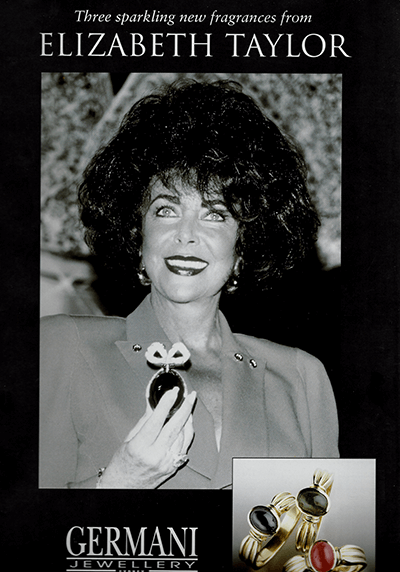 Germani had the honour of designing a jewellery collection ‘Ruby, Sapphire, emerald’ for Elizabeth Taylor to be featured in the national TV show ‘Sale of the Century’ along with her newly debuted three sparkling fragrances in 1994. 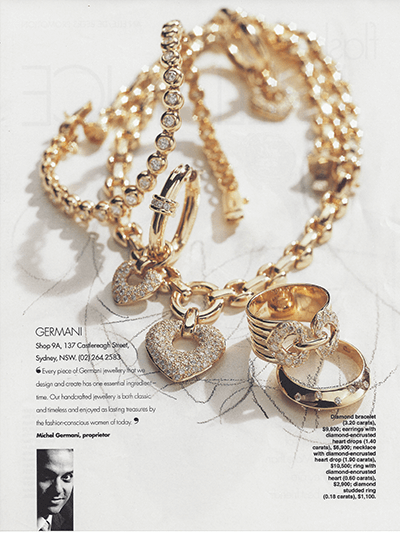 Germani specialises in the bridal market focusing on classic and timeless pieces. 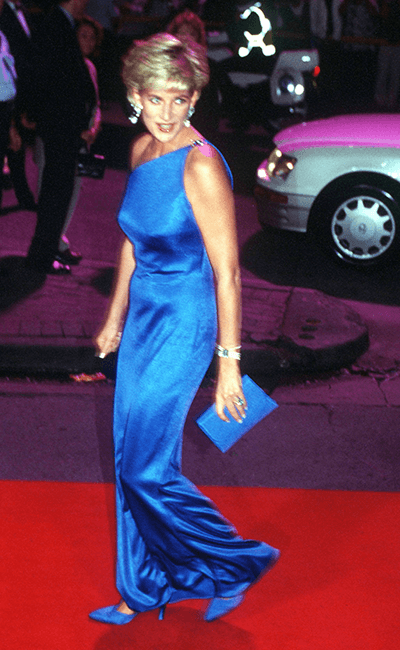 During the Victor Chang Cardiac Research institute dinner dance in Sydney, Michel was introduced to Princess Diana. Michel had to privilege to design a pair of exclusive sapphire and diamond earrings to match her ring. The earrings were delivered to her temporary residence, Ritz Carlton Hotel in Double Bay. 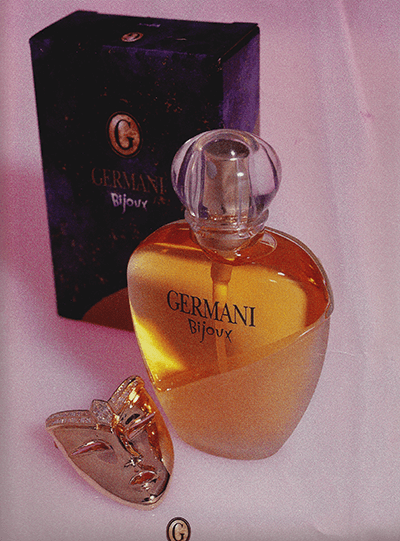 Germani’s own perfume, BIJOUX was launched. 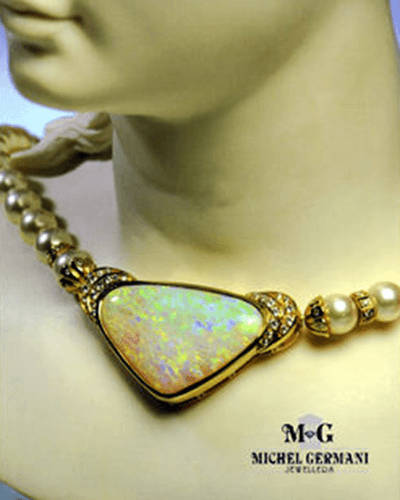 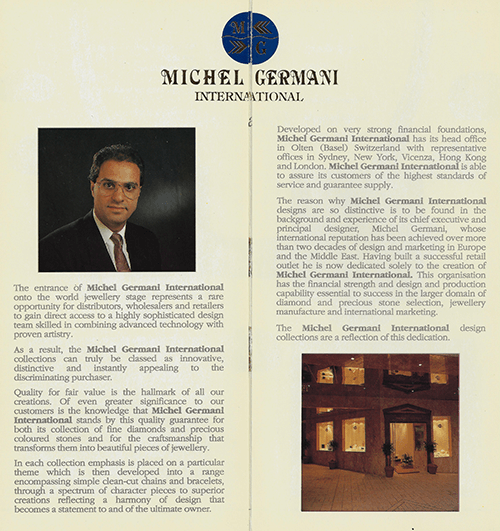 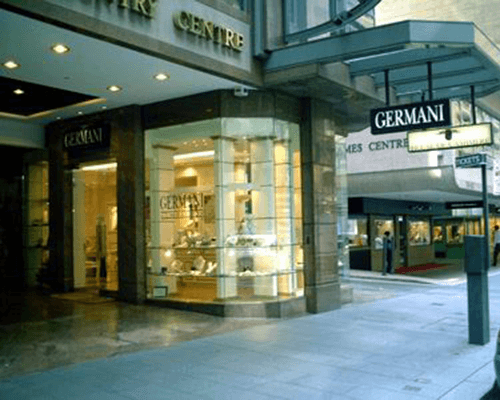 The grand opening of Germani store located in Castlereagh Street. 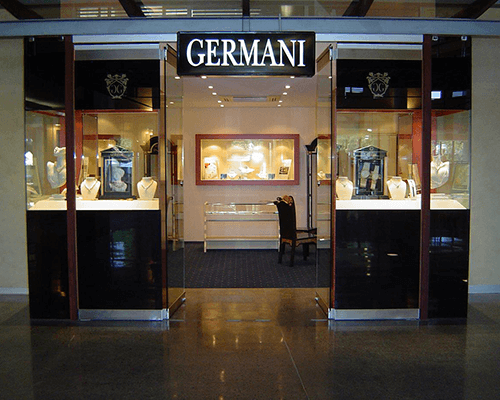 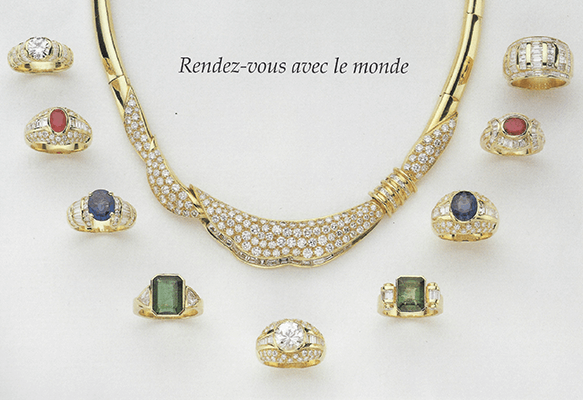 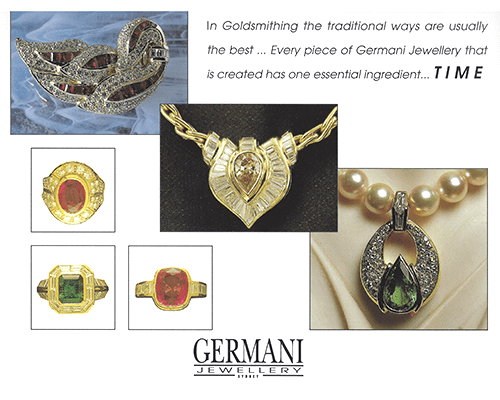 In line with Germani’s core values of creating classic pieces that stand the test of time, the ‘timeless’ collection launched, further accentuating the concept in gold smithing, “traditional ways are usually the best” 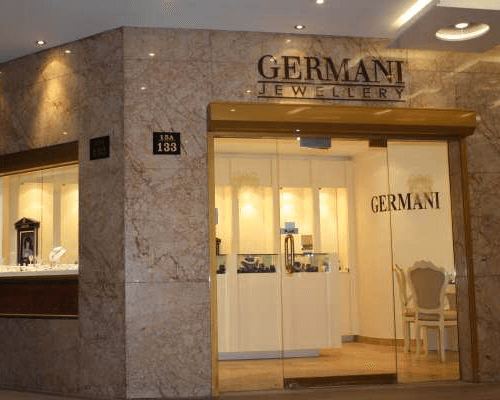 Germani establishes a store in Piccadilly 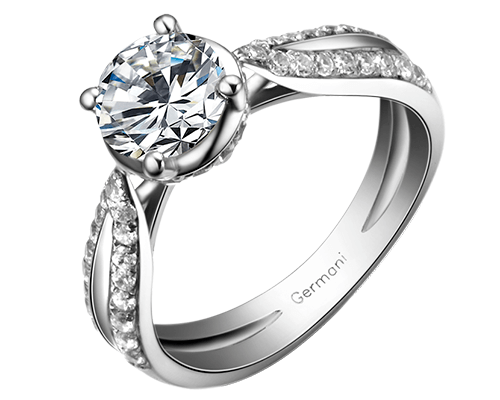 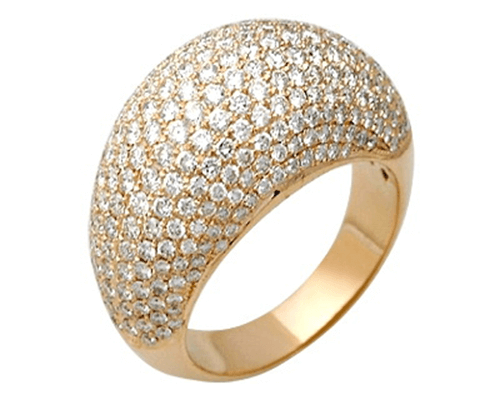 Germani’s speciality is micro setting. A technique where small diamonds are arranged uniformly and tightly, giving the final product of what appears to be a honeycomb or layer of diamonds with each stone held in place with small grains of metal. 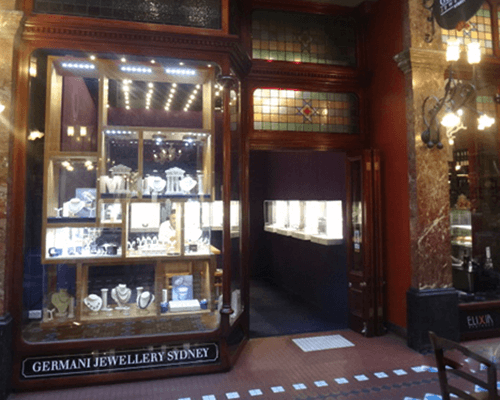 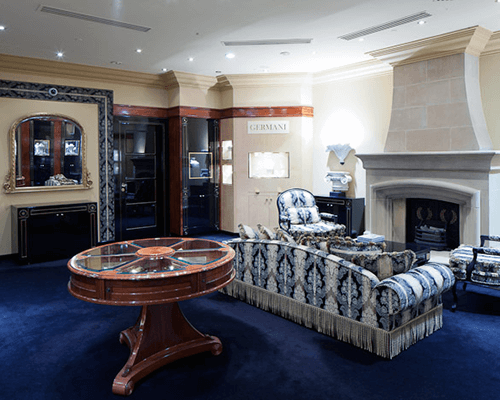 Sheraton on the Park hotel store 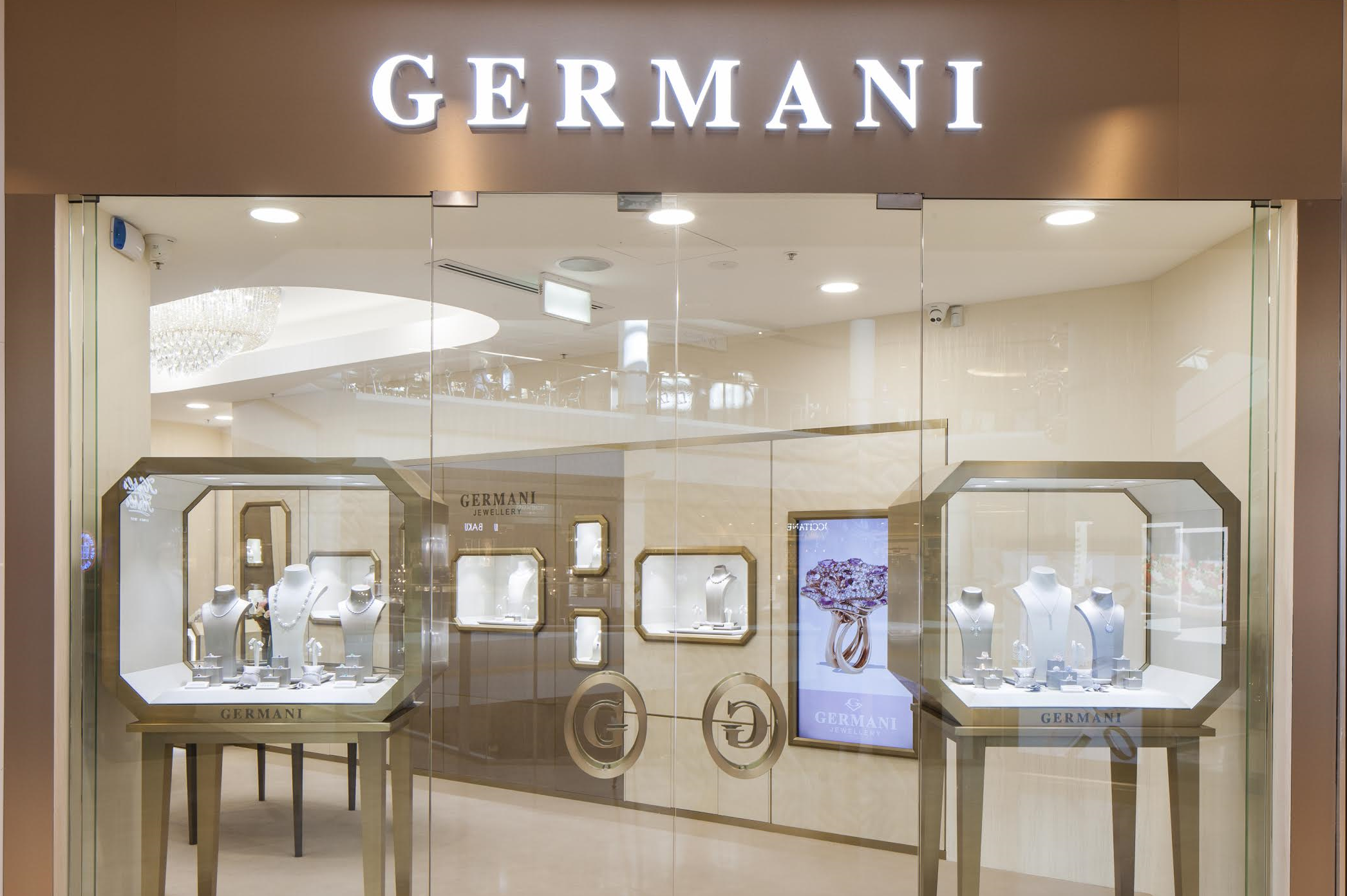 After being in Sydney CBD for more than thirty years, now decided to open its first branch in the suburbs. Starting its expansion with a store in Chatswood chase. 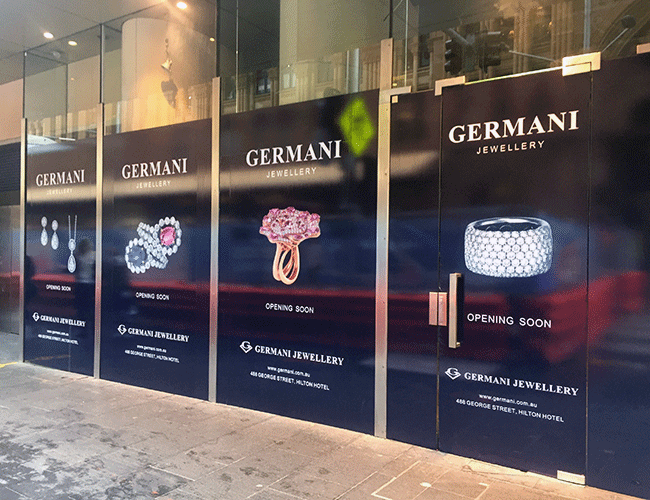 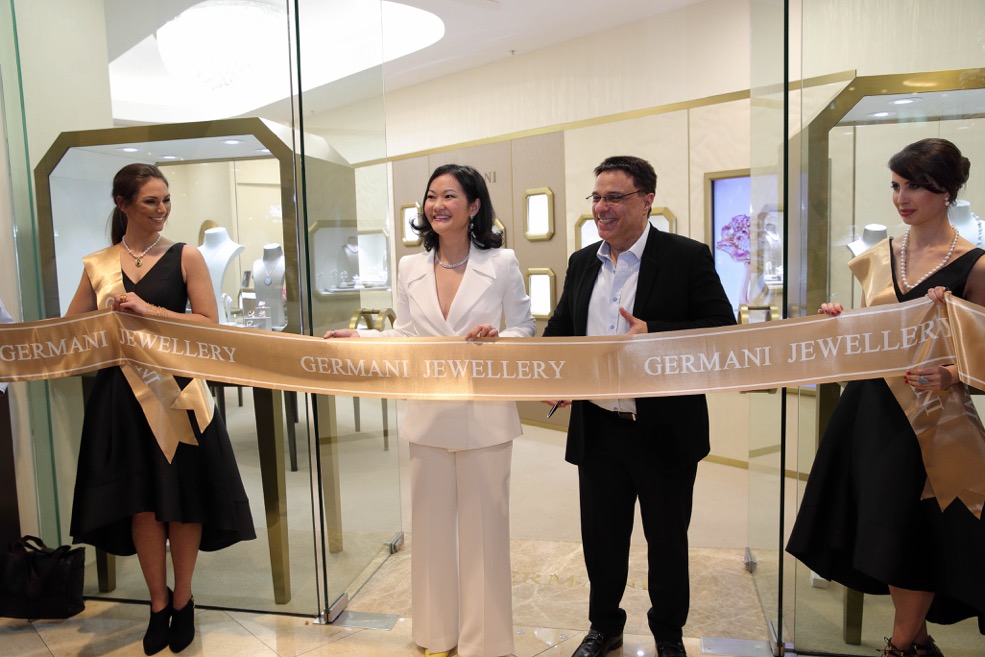 11 August 2016 saw a spectacular night for Germani Jewellery as it held the Grand Opening of their new Jewellery Boutique in Chatswood Chase. The event was exactly as you would have expected from a quality jewellery boutique, with exquisite champagne flowing, gourmet food and networking.